We now have our first review diary for in-ear headphones, starting with the new Yamaha EPH-M100. This is posted diary-style, the latest updates go on top. This format speeds up sharing my impressions, versus waiting until the complete review is finished, which could take weeks/months – I guess I caught the GRRM bug of ever-sprawling and ever-expanding 🙂 The Holidays caused a delay in the start of this, but here we go…

For comments, questions, corrections, suggestions, and such, please feel free to use the contact form or leave a comment below.

How well does the 3-button in-line remote work?

On Apple devices (iPods, iPads, iPhones) all is well since this is an MFi device. There are three buttons, a Volume UP, a Volume DOWN, and the Middle Button. The up and down increase and decrease volume as expected. The Middle Button switches between Play and Pause with a One press. Two presses take you to the Next track. Three presses take you to the Previous track. These are quick click-click-click presses, not leisurely ones. If they are not behaving as such, before you declare them lemons, check the Settings of your app or device, some apps allow you to override the default behavior or may have default presets that are different. For example, in some Podcast apps or Audiobook apps the Next/Previous functionality may be mapped to 30 second jumps forward and backward instead.

On Windows Phone and Firefox OS, none of the buttons work, it pains me to say. I used the Nokia Lumia 520 running Windows 8.1 (Xbox Music, 7digital, Audible) and the ZTE Open Firefox OS smartphone. Music still plays of course, but there is no response at all to the buttons. You have to adjust volume from the device.

On Android, the situation is somewhere in-between. I used three representative devices for testing, a Nexus phone running the latest Android 5.0, a Galaxy Note tablet running Android 4.4.2, and a prehistoric phone running Android 2.2.x. With all three and a variety of different apps, Volume UP and Volume DOWN did not work on anything 🙁 The Play and Pause toggle worked on every device. The biggest variable were the Next and Previous buttons, depending on which app was used. Here is a table for the Nexus Android 5.0:

Note #1: “Previous” gets interpreted as “Next” plus “Pause”
Note #2: it takes you to the Next track but pauses it, so you have to press Play again for music to play
Note #3: the current (as mid-Dec-2014) Pixel Player Pro version has a software bug that doesn’t change the display when you use Next/Previous but the actual song played changes. Try it with an album or playlist you are familiar with and it’s obvious that it works.

The situation was similar on a Galaxy Note 8 with Android 4.4.2, with one difference, “Previous” worked with Poweramp consistently. I also tried N7 and Shuttle+ and Next/Previous worked with both. On the other hand, Previous did not work with the default Music app that came with the device.

We put on our headphones hundreds if not thousands of times, so in practical terms, being able to easily tell Left from Right is a good idea. With the EPH-M100s there are three ways:

For listeners who are visually impaired, steps #1 and #2 work in quickly figuring out L from R. Overall, it is fairly easy to figure it out.

I want to give it more time (it = both me and the earphones) before I start talking about music and sound, but creature comforts are ready to be discussed!

Their slightly unusual shape is actually helpful in keeping them on your ears. They have not fallen off since I started using them, while sitting at a desk and during non-exercise type of activities. They go in the ears, I can feel the seal, and they stay in. The eartip size that came preinstalled is a good fit for me.

The 3-button remote and mic is (as usual) on the left side. Head sizes and shapes vary, but when standing up, the mic/remote is slightly below where the adam’s apple is. It is very easy to tell the difference by touch between the volume button and the middle button (different shape, different height). I will have a detailed table later on describing which buttons work with different mobile OSes. It is an MFi (Made for iPhone/iPad/iPod) but often some (but not all) features work in varying degrees with Android and Windows Phone devices. Sometimes this varies from app to app too. But that’s a story for another day.

The cable is long enough to keep your music playback device in a pant pocket, even a lower cargo pant style pocket. Except perhaps for rangy 7-footers, everybody else should be fine with the length.

I haven’t had any tangling issues with the cable yet, but I have not put the earphones in a pocket or coiled them. I just hang them from a hook for now. I will obviously have to put them in their case when I start testing them “in the real world”.

I haven’t noticed any discomfort during multi-album sessions, and a couple of times when I had to stop listening mid-album, I had the feeling of not wanting to stop, which can be a rule of thumb that you are enjoying the listening experience.

I haven’t had any issues with microphonics so far but most of my listening so far has been while working or reading or doing other things. The cable is not fluffy-weight, so it doesn’t flop around when the wind blows 🙂 Obviously if I tap my fingers (as if playing the piano) on the upper reaches of the cable (above the Y split), I can hear/feel the vibrations.

What’s In The Box?

We have a detailed post with text and pictures showing you what’s inside the box. No audio, no video, it is a library safe post 🙂

These are the specs from the side of the box: 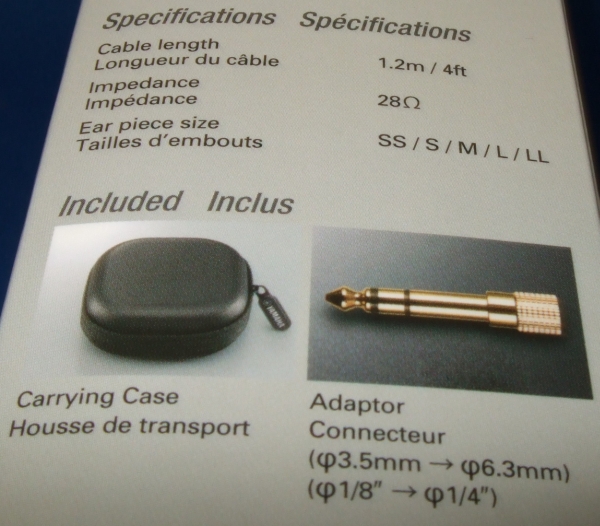 I did not purchase these. They are a review sample that will not be returned but will stay here for further comparisons and listening sessions.